Hope you all had a safe and spooky weekend! I had two extremely awesome Halloween parties over the weekend. I saw some really awesome costumes. For those that aren’t into hitting the bars for Halloween, I highly recommend going to Penn Station around 8pm. The roves of people walking through the terminals in amazing costumes is quite the sight! Even more of a sight, after midnight when those perfectly polished costumes are unraveled and patrons are obviously intoxicated.

The highlight of my weekend was seeing a hammered pair of Super Mario Brothers: Luigi and Mario. They were acting a MESS in Penn Station while I was waiting for my train home. I turned to check the time and saw that Luigi caught the attention of the police dog and cops decided to cuff him. I joked that it was “GAME OVER” for Luigi and he needed a “1up” mushroom badly… add your own mario jokes in the comments section!

On Friday night, Yelp Queens hosted a huge 70’s themed costume party at Play Lounge on Queens Boulevard. When I got the invite to this party, I was so excited! The theme was disco…and my hips were never meant for disco. So I did some research and channeled my inner hippie… and I had some serious fun!

I found this amazing handmade retro headband on Etsy.com for $13. I paired it with a Maroon ruffled maxi dress found on clearance for $10 in the Juniors section of Macys along with a vest I got from old navy recently. I completed the look with bright blue eye shadow and flat sandals.

The level of creativity was through the roof! Play Lounge is a huge venue. The venue can hold up to 500 people and houses a bowling alley, ping pong tables, air hockey, a mechanical bull as well as a dance floor with plush booths. What a sight!

Me, Patty, and Julia pose with Yelp’s Queens CM, Jando, who was channeling his inner Steve Rubell as he was the master mind behind this epic night. 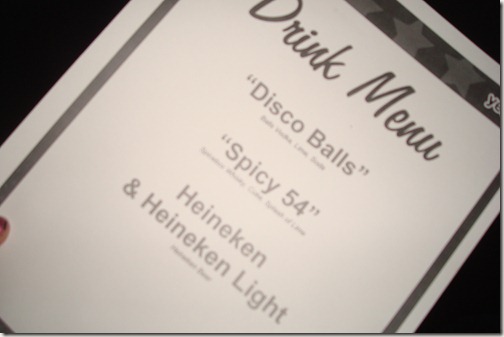 We munched on some light bites courtesy of Play Lounge. Highlight included fried mac and cheese and salmon tartare. We had several drink sponsors which included Heineken, Whiskey and Balls Vodka. Not a huge fan of whiskey… I stuck to the disco balls which were like limey vodka tonics.

I didn’t take advantage of the sweet facility but made good use of the dance floor. In a surprise, yet last minute twist, my mother who is a new Yelper got an invite to the party and showed up with my dad! They totally nailed the look! And I was so happy to see them!

When a particularly groovy tune came on, my parents stole the dance floor to do an amazing hustle. That expression is one of sheer pride. And everyone was totally surprised by my parents having a blast at this party full of Yelpers. 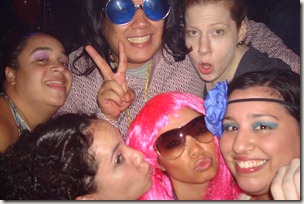 Sweet bites were provided courtesy of a local Queens chocolate shop- delish! The group was definitely feeling the effects of all those disco balls… The pics definitely prove that.

I literally danced the night away! It was an all out dance party once me and another girl started the Electric Slide to the COPA CABANA song. The DJ totally got the hint and played the most epic dance song ever.

In the end, I had a fantastic time! The crew did an amazing job on the party and we all had an amazing time! I danced like I was a teenager again and lost count on how many disco balls I consumed. The following morning’s massive headache confirmed there were too many disco balls. And the pain in my ankles and knees confirmed that when the song “jump around” comes on, its okay to NOT jump for the Entire song #OhMyAchingBody

There was no time for relief as I had another party that night. My friend Lily was throwing a costume Birthday Party… while a NorEaster hit the Tri-State Area. I prepared for the worst as I packed my costume and wore snow gear (in OCTOBER?!?!) to the party venue. 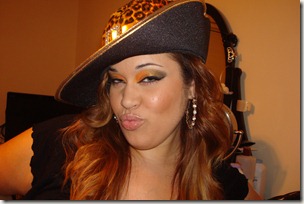 My friend Danielle is an excellent make-up artist and helped me get my hair and make up in order.

The party was a wild success. Good company. Good costumes. Good music. All despite the gross weather! Lily, the Birthday Girl, was a sexy Flapper Girl. Mary and her hubby, a corrections officer and a prison inmate. cute. 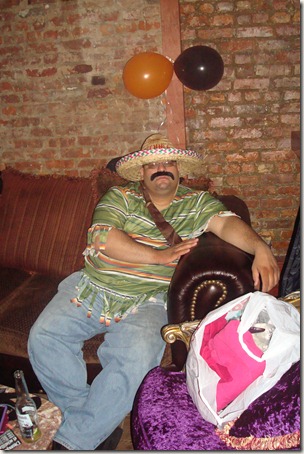 Vinny, Patty’s hubby was a drunk Mexican. He pretty much had that face on all night- staying in Character I assume.

Patty was an adorable 50’s girl with a poodle skirt. 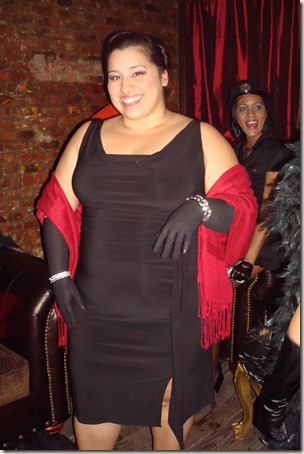 Danielle was a lady pimp! She worked that costume like nobodies business! I, on the other hand, dressed up and let people guess what I was.

“Are you Audrey Hepburn”?

Yes! How did you know?

“Are you a Flamenco dancer?”

My intended target was a Debutante from the 20’s… but you know, I worked it out. I looked nice, that’s what counts.

But I was mostly a Madame, since I was hanging out with the pimp all night.

Posed for pics and danced the night away… again.

Sexy posing with my friend Cindy who wore a very comfortable and gorgeous sari. Also, my friends Jen and James who are getting married in two short weeks came as Peter Pan and Tinkerbell! adorbs.

Overall, my weekend was fantastic. My ankles and Knees hate me. But if I had to do it all over again, I would have sat down during “jump around” not changed a thing!

What are you dressed as this year?