Restaurant week is a seasonal event in NYC where select restaurants offer prefix lunches ($29) and dinners ($42) at a fixed price in the five boroughs. It started nearly 10 years ago and has gotten so popular that the “week” usually lasts about 6 weeks; giving one ample time to get as many deals as possible.

I personally like experiencing a restaurant that I would normally not visit but I also find that the experience is very different on a regular dining day then during restaurant week. Never the less, my family and I always participate.

One such place where we particularly love Restaurant Week lunches is David Burke Kitchen in Soho. There is only one thing that I actually crave here and luckily, it’s offered during restaurant week so I am one happy lady.

It was very easy to obtain a reservation for 1PM on a rainy Sunday in SoHo. My husband, parents, and I arrived hungry and ready to feast. For $29, we were entitled to an appetizer, an entrée, and a dessert. Not too shabby. We almost all ordered the same exact thing which means no tasting anything new… but when you know what you like, there isn’t really a need for all that.

I had a cup of coffee which was nice and strong- perfect little jolt!

For starters, everyone minus Brent ordered the plain Greek yogurt with house made granola, nuts, berries, and honey. This is no ordinary bowl of yogurt. I cannot explain why this tastes as good as it does but I have a feeling it has to be the full fat yogurt. It was tart and creamy with a hint of sweetness from the honey and berries. We scraped our bowls clean.

As my entrée, I ordered the burger. A huge heavy burger to go on top of the bowl of high protein yogurt I just scarfed. The burger was delicious but I barely finished half. I packed the burger and fries to go (which were perfect later that evening for dinner!).

Dessert was a super-rich chocolate cake. I managed half and had to give up. Being full was a major factor but the richness on top of that was just too much. I left with a lot of leftovers.

While the Restaurant Week promotion is over until Winter, the bowl of greek Yogurt at David Burke Kitchen is worth a trek to SoHo when you’re craving it!

It’s my favorite time of year: Restaurant Week.
Ah, Restaurant Week. It’s such a hot debate on some of the Facebook Groups that I belong to. A vast majority of “foodies” scoff at the concept of Restaurant Week altogether. They cringe at the idea of restaurants doling out bargain dinners to the average Joe and defend the hard working people in the industry who get dumped on during the bargain week.
To start, Restaurant Week is a select number of restaurants that offer a flat rate, pre-fixe, 3 course dinner. Lunch, $25. Dinner, $38. Some restaurants are really great for RW, others not so much. These anti-RW people mostly complain about not being able to experience the whole menu or even missing out on the experience of paying a month’s rent on a 3 course dinner.
But for me, Restaurant Week is a glimpse into fairy tale land where I can sit and dine in an establishment I might not otherwise afford. I am okay with admitting I am not a huge financial success, but what I have is adequate to make life livable. I can put food on the table. I can clothe myself. And sometimes, I can dine in a swanky restaurant on a budget.
Thank you Restaurant Week!

Following my humbling experience at the 9/11 Memorial, BR and I made reservations at Wall Street’s Capital Grille. It wouldn’t be my first time at this Capital Grille. The first time was for a Yelp Event hosted by the Generous Pour. I fell in love with the interior of this former bank and when I saw they were among the restaurants participating in RW, I made a reservation for Lunch.
BR has a heart for finance so when he saw the interior of the Capital Grille, he immediately loved it. Not to mention, seeing that the original vault was still intact and offered the room to be rented… note for a possible party in the future after I hit the lotto.

The staff here were very attentive.  Eager to take my coat, the hostess graciously hung our coats and seated us in a lush booth tucked in a corner of the restaurant with great people viewing opportunities. I was given both menus to choose from for lunch.

My heart was set on the RW menu so I ordered from there. The occasion called for a glass of wine. I really liked that Capital Grille had a selection of half bottles for purchase. A full bottle of wine seemed to glutinous for lunch. The half bottle of the house red, a mere $18 was a great deal. And filled our glasses just enough to quench our thirst for a little vino.

The server brought over a bread basket filled with a seeded dinner roll and two crispy sesame crackers along with a pat of soft, creamy salted butter. Dieters go home.
The RW menu offered an appetizer, entrée and dessert. For my starter, I chose between a Caesar salad, mixed green salad and clam chowder. I planned to have an entrée with a salad so I opted for the clam chowder. BR ordered the Caesar. 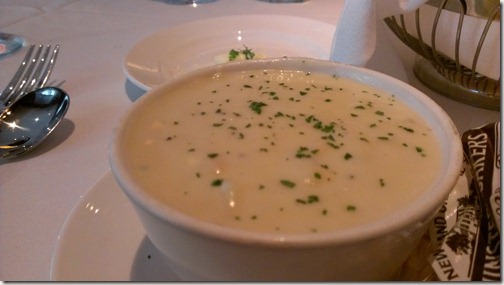 The clam chowder wasn’t overly spectacular but it was hot, creamy and had enough bits of clam in it to appease me. As far as the wow- factor, there was none. But it was cold outside. And the soup was hot and perfect for the day.  BR’s Caesar had some huge and buttery croutons that I might have reached over to taste.  A little soggy, but good. 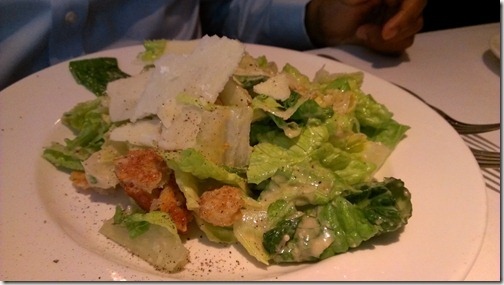 The entrée menu had a little bit of this and that to please mostly anyone. Some salmon, a burger, and a steak. I find that when dining on the pre-fixe menus, I get a thrill out of ordering a steak. The sirloin steak with an arugula salad was calling my name. BR ordered the cheese burger and truffle fries. 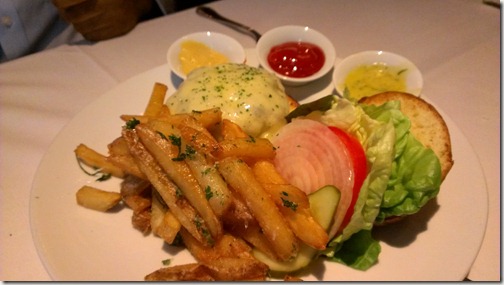 When ordering steak, I like my steaks medium rare. I asked that the steak be prepared according to the chef’s recommendation. Lo and behold, a perfect medium rare. My darling ordered his burger medium rare as well. It was presented with an aioli, ketchup and spicy mustard. He loves mustard. I loved his aioli and saw fit to use some of it on my steak.

The steak was tender with a lovely red center. It was a hefty steak for lunch so I was grateful for the salad that it came with… anything heavier and I wouldn’t have made it through the evening.
BR’s burger was flavorful! And every bite he took resulted in delectable burger juice dripping from his hands. We both loved it. And while it didn’t look so big, it was certainly filling. The truffle fries were crispy and salty with just the right amount of truffle oil. They were his first truffle fries. He liked them very much.

As we felt the fullness in our bellies, the server came out with dessert. We had a choice between a flourless chocolate cake and a trio of homemade ice cream flavors.  I chose the flourless chocolate cake, BR chose the ice cream. I was too full to press on; however, after a bite of my dense and not-too- rich espresso chocolate flourless cake, I pressed on. I devoured my dessert greedily while BR ate his ice cream. I couldn’t care to try it, but he said it was delicious.

When we finally had enough, our server – who was ever- attentive, gave us his card with our check. For wine, 2 three course lunches, and tax, our lunch came to $74. Considering how much we actually ate, we got a serious bargain. We tipped generously for the wonderful service and rolled ourselves out of our decadent lunch.
If you are feeling inclined, do make a reservation for RW. Treat yourself. You deserve it!