Here we are, the third and final part of the #PepperParty! This was the first time I have ever participated in a project like this and while I have had a fair share of hiccups and mishaps, I am really happy with how it all came together. And a pat on my back for dealing with all the lovely surprises that came my way (RIP Laptop).

I would be remiss to say I didn’t learn anything- there are so many fantastic pepper recipes out there! One recipe I am particularly interested in is the Quiche Provencale that Lauren from Healthy. Delicious posted during the first week   I also thought the people over at Divemex were incredibly generous! Show them some love on Facebook. The growers of Divemex specialize in greenhouse grown peppers in state of the art facilities that facilitate the production of the highest quality peppers in some of the safest facilities anywhere. But most importantly, as a Fair Trade Certified company, they have an unwavering commitment to social responsibility that puts workers first.

So for today’s final installment in the #PepperParty, A lucky reader will win $200 in Food Magazine Subscriptions and the best part, its winners choice. Think of all the issues of Cooking Light, Food Network, Food and Wine and Bon Appetit you can get!!! Don’t forget to enter with the rafflecopter below!

And that’s not the only prize up for grabs! Join us today for a Pin Chat Live from 8-9pm tonight for chances to win one of 10 Divemex Pepper Corers and a Subscription to Food Network Magazine!

For my final post for the #PepperParty, I used my beautiful red bell pepper in a coconut curry soup. It was a long day. I had just had a painful procedure on my back and really just wanted to curl up in bed. This soup was so easy to put together and the addition of the bell peppers is necessary. Absolutely.

But, before I get into the warmth and goodness of the soup, check out what the other talented bloggers put together!

Baked Rigatoni with Italian Sausage and Peppers by Mother Thyme

Mini Meatloaf Sandwiches with Roasted Peppers, Caramelized Onions and Mozzarella by Cravings of a Lunatic

Kielbasa with Peppers and Onions by {i love} my disorganized life

Bacon Chili with Peppers by poet in the pantry

Peppers Stuffed with Everything Good by Healthy. Delicious. 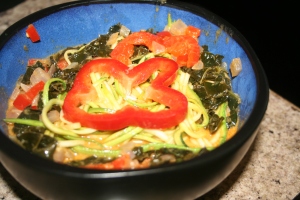 This soup is totally paleo and totally delicious!!!When I started to make it, BR’s nose immediately picked up the curry and his eyes widened with excitement. When I confirmed what his nose was sensing, he was so excited. We love us some coconut curry. It’s soothing, warm, comforting and extremely satisfying. What’s not to love? And it was a nice change of pace from all the meat we were eating.

My local thai place makes fantastic Thai food and the one thing that sets their red coconut curry from anywhere else is there addition of slightly sauteed bell peppers. Not only does it give it burst in bright color, but it adds a great texture as well as flavor. It’s the reason that all of my homemade curry soups and stews are filled with bell peppers. It makes it totally perfect for this final installment of the #PepperParty. And because BR said I hadn’t make fish in a while, i made some paleo friendly tilapia to completely make this one nap inducing soup.

1 can of coconut milk

2 cups of cooked noodles (ramen, spaghetti, or in my case, julienned zucchini noodles) 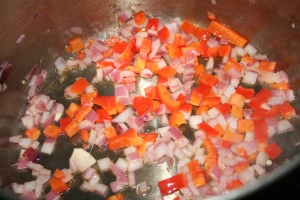 In a medium sauce pot, heat coconut oil (or preferred cooking oil) over a medium heat. Add the diced portion of the red bell pepper and allow to sautee until softened in the pot, stirring constantly- about 5 minutes.  Once the peppers have softened, add the red pepper paste to the pot and stir to coat peppers (not necessary, but i like to do that). Pour in the coconut milk and chicken broth and stir to combine the curry and the coconut milk. Lower the heat and allow the broth to simmer. (if you are using kale, add it now)

While the broth simmers, heat a heavy bottom skillet over medium high heat. Add the oil to the pan and allow it to get hot.

Dust the tilapia with salt and pepper and bread with coconut flour (or flour of choice).

Gently add the tilapia to the pan. When it hits the pan, it should sizzle. Lower the flame to medium or right between low and medium and let the tilapia fry undisturbed for 4 minutes. Flip over and fry for 4 more minutes. When it’s done, let it rest on a plate lined with paper towels.

Fill 2 big bowls with preferred noodles. If you are using zoodles, add the zoodles raw since the hot broth will soften them. Fill the bowls of noodles with red coconut curry broth and garnish with sliced bell pepper. Serve tilapia on top of the soup, or on the side to keep the crispness. 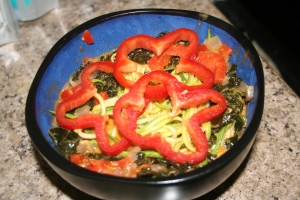 Here is an extreme close up of the zoodles and tilapia in the red coconut curry soup.

And best of all, it was paleo-friendly!

Want a chance to win a sweet stack of Food magazines??? Hit up this Rafflecopter! Good Luck!