The first installment of the #PepperParty was so fun and so amazing to see all the creative posts featuring the pepper! The group of bloggers working together on this little project is quite a bunch and so extremely kind and supportive. It’s been a true delight. And the “icing on the cake” has been working with the awesome people at Divemex. The growers of Divemex specialize in greenhouse grown peppers in state of the art facilities that facilitate the production of the highest quality peppers in some of the safest facilities anywhere. But most importantly, as a Fair Trade Certified company, they have an unwavering commitment to social responsibility that puts workers first. Please show them some love on their Facebook Page!

Follow the link at the bottom of this post to win Wusthof Classic 8” Chef’s Knife- $190 value. If you love to cook, then you know the importance of having good cutlery!

For this 2nd post honoring the bell pepper, I found my inspiration for today’s post with a simple aroma.

One of the most amazing things that I love food is how they trigger memories with a taste or a smell. While my mother doesn’t do much of the cooking these days, my senses still get excited when she makes a batch of sofrito. Sofrito is a staple is Puerto Rican cuisine. It’s a paste that’s made by blending tomatoes, onions, peppers and herbs that adds a TON of flavor to soups, stews, and pretty much anything savory.

I have fond memories of mom sitting at the dining table with her blender and the table being covered in chopped peppers, tomatoes, garlic, onion and cilantro. My tiny little nose then was too sensitive to appreciate the pungency of the fresh veggies but once the sofrito was made, I’d get the warm and fuzzies when I heard that sizzle in the pan followed by the aroma of all those veggies- and still do today.

Some grocery stores sell Sofrito in the frozen food aisle but there is nothing like fresh, homemade sofrito. My mother would always make a batch and put some on the side for me. Sofrito freezes really well so it would last me for a long while. She recently passed the torch to me to start making my own sofrito. It’s simple enough if you plan ahead. In light of this pepper party, I thought this would be a great recipe to highlight the bell pepper. And also, a coworker with a green thumb had a ton of tomatoes and needed to get rid of them. Peppers? Tomatoes? Time for Sofrito. But before I get to the recipe, check out what the other bloggers are doing with their bell peppers:

Stuffed Bell Peppers with Chicken and Cheddar by Cook the Story

Onions and Peppers Naan Pizzas by poet in the pantry

Steak Fajitas with Drunken Peppers by Cravings of a Lunatic

Spinach, Pepper, Mushroom and Tomato Frittata by Take A Bite Out of Boca

Blue Cheese Pepper Poppers by {i love} my disorganized life

Goat Cheese with Bell Pepper Spread by The Redhead Baker 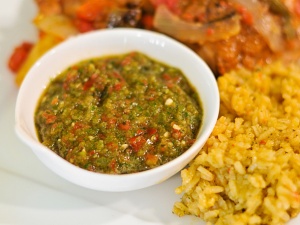 Directions: Place all of ingredients in a blender or food processor and pulse until all the ingredients create a paste (reminiscent of pesto).

Store in an airtight container for up to 10 days or freeze in ice cube trays for perfect portions. I freeze my sofrito in small plastic tubs I get from the Chinese take out place. They are perfect for storage.

Once you have your sofrito, try adding it to stews right before you brown your onions and meat for a kick of flavor or using it to season meat or chicken.

My favorite way to have sofrito is in stews. Mom still makes the best pollo guisado ever (Spanish chicken stew).

Ready for a chance to win that Wusthoff Chef knife?? Follow the rafflecopter!